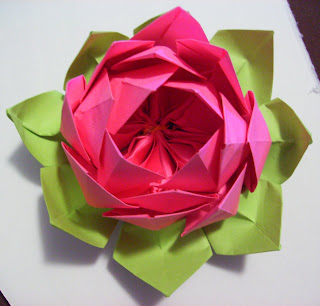 and these super cute mini cranes which i turned into earrings

This reminds me of the book 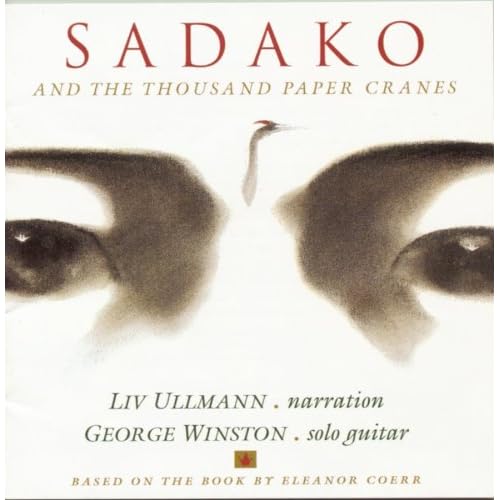 Its beautiful illustrations captured my heart 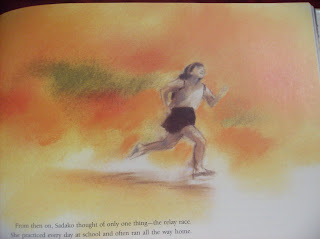 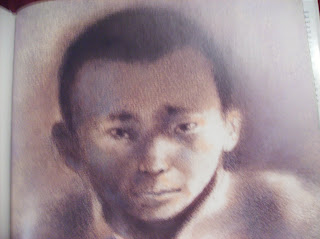 Sadako and the Thousand Paper Cranes is a non-fiction children's book
written by American author Eleanor Coerr and published in 1977.
The story is of a girl, Sadako Sasaki, who lived in Hiroshima
at the time of the atomic bombing by the United States.
Sadako was born in Hiroshima in 1943.
When she was two years old, a nuclear bomb was dropped on her city.
When Sadako was 12 years old, she was diagnosed with leukemia.
while in her sickbed, she started folding origami cranes
in hope of making a thousand, which supposedly
would have allowed her to make one wish, which was to live.
According to the legend, folding 1000 cranes will protect you
from sickness and trouble.
The crane is a symbol in Japanese tradition of
longevity, hope, happiness and peace.
The Japanese believe that the crane lives for a 1000 years,
and that's why longevity is also attributed to the bird.
While folding the paper cranes, Sadako said:
"I will write a message of peace on your wings, and you will fly away
and spread the word to the world".
However, she only managed to fold 644 before
she became too weak to fold any more
She died shortly after.
Sadako's efforts touched the hearts
of her classmates and teachers,
and her friends and family helped finish her dream
by folding the rest of the cranes
which was buried with Sadako.
Sadako became a national hero in Japan,
and thanks to her belief,
The crane became an international symbol of peace.
In May,1958, due to the fund raising efforts of her friends,
in the peace park in Hiroshima a statue was built,
dedicated to Sadako and the peace cranes.
Now every year on O Bon Day,
which is a holiday in Japan to
remember the fallen ones of the bombings,
thousands of people leave paper cranes near the statue.
On the statue is a plaque:
"This is our cry. This is our prayer. Peace on Earth."

There is even a Sadako statue built in the Peace park in Seattle, Washington

Following that spirit, my hubby and i decided to fold 1000 paper cranes.

I'm planning on displaying them (along with the book) in our home
but here lies the dilemma.
i cant decide how to display them
some ideas include- 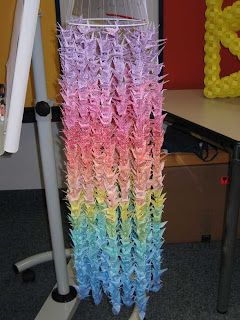 should we do color or simplistic white 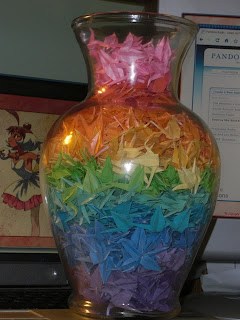 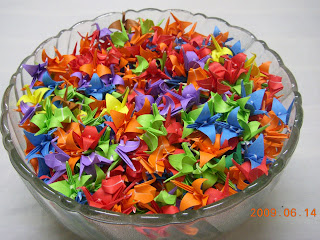 or even display them in a shadow box

either way, it is all about the spirit and belief behind the action
"This is our cry. This is our prayer. Peace on Earth."

(an American flag made from 1000 origami cranes)
Posted by Crafty Mommy at 6:20 AM

you have got a very nice blog ,i am having some new and used bobcats for sale check them out.